My pet project, NuGet.Insights, uses Azure Functions heavily for all of the data processing and data aggregating related I need to perform in-depth NuGet package analysis. Each unit of work is captured as an Azure Queue Storage message and is processed via the Azure Function Queue trigger.

Right now, it uses Azure Functions App Service Plan P1v2 SKU to crunch the data and analyze NuGet packages. I’d like to cut down on the Azure bill and reduce the compute costs.

To do this, I figured out how to run Azure Functions on Azure virtual machine scale sets with spot VMs (low priority). By doing this I cut my compute costs by over 90%!

At first, I didn’t know how to even run an Azure Functions app and went down the route of automating the installation of the Azure Functions Core Tools on a VM. Even at the beginning, I was concerned about this approach because it was not clear to me that the development runtime has fully compatible features or analogous performance as the runtime running in Azure. Also, the installer for this brings along all sorts of extra stuff I don’t need for runtime.

Fortunately, I stumbled upon the Dockerfile for running an Azure Function on Windows Docker and this gave me the hint I needed. This told me two critical things:

All I had to was get the host and the app running on VMSS nodes and then I was in business!

⚠️ Warning! This experiment of mine is NOT production-ready and certainly has all sorts of undiscovered caveats. Try it out at your own risk. I offer zero warranty!

For those that just want to look at the code, I’ll skip the design considerations. Take a look. I’ve implemented a sample repository so that you can see it in action and even try it in your Azure subscription: joelverhagen/az-func-vmss.

These are the resources that get deployed: 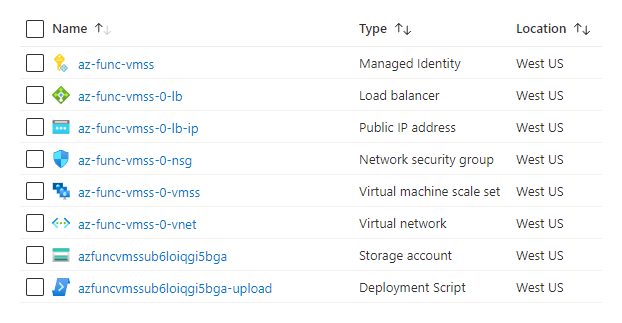 On the Load Balancer resource (or in the Azure deployment Outputs), you’ll find a domain name which points to the HTTP (port 80) endpoints on your instances. 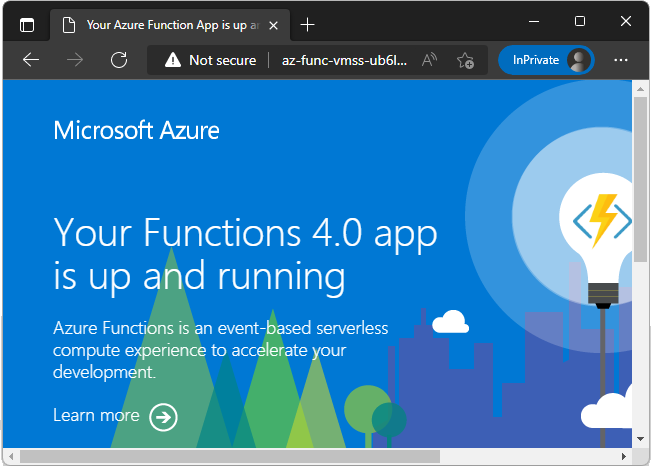 Here are some notable files:

For details on my various design decisions, see the Design section below.

When I tested this solution for my NuGet.Insights project, I cut my compute costs by 92%!

In the test, I ran two versions of NuGet.Insights and executed 4 big analysis jobs per variant. The analysis jobs were: load all ZIP and signature metadata into Table storage, load all .nuspec files into Table Storage, analyze package assets, and analyze .nuspec metadata.

My previous compute option was using up to 30 instances of P1v2 App Service Plan for running Azure Functions.

I used the Standard_D2ds_v4 in the westus2 region with Spot priority.

It other words, the compute work was completed more quickly and it was cheaper. This make sense since P1v2 is single core machine and a Standard_D2ds_v4 is a two core machine and Spot VMs main claim to fame is being much cheaper.

Other peripheral costs for running my NuGet.Insights project include Azure Storage, an App Service Plan for an admin site, a single Azure Function instance for emitting metrics, and bandwidth (talking to NuGet.org public APIs). These numbers were pretty much the same (give or take $0.05) between the two variants.

Fundamentally, I am interested in the framework that Azure Functions provides: .NET Core host, the notion of triggers as an entry point, and a rich collection of useful built-in primitives like timers. I care a bit less about the huge variety of hosting options that Azure Functions has: Consumption Plan vs. App Service Plan, Docker images vs. ZIP publish. Originally, the project used a Windows P1v2 App Service plan for hosting and ARM-based ZIP deployment.

In the end, I want to run my code on Azure Functions and I want to do it as cheaply as possible.

A couple of months ago I discovered Azure Spot VMs. These are low-priority VMs potentially available in all of the same VM SKUs that are typically offered in a region but they are billed at a greatly reduced cost (sometimes 5-10% of the normal price). The catch is that there is no guarantee any specific SKU is available at any time and your VM instance may be evicted at any time with short notice as demand increases in that region. So, they’re cheap VMs but you may get evicted at any time.

Spot VMs are a great match for stateless, worker roles like Azure Functions queue triggers if you are tolerant of evictions from time to time.

My NuGet.Insights project automatically processes new NuGet packages published to NuGet.org every couple of hours via a timer trigger. If it runs a bit slower due to VM evictions or completely fails to run for half a day here or there it’s not a big deal, especially considering the potential cost savings.

Some services in Azure can run directly on spot VMs, passing the savings directly on to you, e.g.

I would love to use AKS but Windows workloads don’t support managed identities. NuGet.Insights needs Windows for at least two of the package analyzers so it’s a non-starter for me.

With this knowledge in mind, I selected VMSS as my compute option and figured out how to deploy and run Azure Functions there.

We’ll invoke the WebJobs.Script.WebHost project from Azure/azure-functions-host using the .NET runtime. We’ll use environment variables to point the host to our Functions app as well as define custom configuration for our app.

Currently, the Standard_D2as_v4 is cheap right now (May 2022) and seems to be available a lot of the time in the Azure regions I run my experiments in (westus, westus2, westus3). You can pick whichever SKU you want but this seemed like a great balance between computing power, cost, and availability.

With VMSS, you can choose a Microsoft or 3rd party provided VM image or you can build your own with all of your code pre-bundled.

I found that it was much easier to use a base image (e.g. 2022-datacenter-core-smalldisk) and install everything needed for the app using CustomScriptExtension.

An alternative approach would be to use Azure Image Builder to bundle up a VM image with the Azure Functions host, app, and even configuration baked in. I avoided this approach since I found that the end-to-end VM provisioning and CustomScriptExtension installation flow is relatively fast (3-5 minutes) so it doesn’t seem worth the effort to produce and store custom VM images.

One of the tricky parts of using an ephemeral OS disk is that it has two placement options: CacheDisk (OS cache placement) or ResourceDisk (temp disk placement). I don’t fully understand the trade-offs between these options since my own very superficial performance measurements with diskspd yielded similar performance numbers.

Many of the cheaper SKUs only have one or the other placement options having a size large enough to hold a Windows Server VM image (which is 30 GB with the smalldisk variants).

For example, Standard_D2a_v4 has no cache disk and a resource disk of 50 GB. This means if you try to deploy with the CacheDisk placement option the initial deployment validation will just fail.

Standard_D2as_v4 on the other hand has a cache disk of 50 GB and a resource disk of 16 GB. That means for a VM image of 30 DB you must pick the CacheDisk.

For a SKU like Standard_D2ds_v4 with a cache disk of 50 GB and resource disk of 75 GB, you can pick either one you want.

You can check on all VM SKU capabilities for this by looking that the CachedDiskBytes and MaxResourceVolumeMB capabilities reported by the az vm list-skus commands (or in my GitHub data file vm-skus.csv).

To encapsulate this decision into an ARM template, I’ve built this lookup table which simply picks the larger of the two placement options so all you need to do is pick the SKU and forget about the rest.

We’ll be using Bicep to define all of the resources needed (which is not just one… VMSS requires a bit of scenery to work).

The files needed for CustomScriptExtension will be downloaded from provided URLs (publicly accessible or Blob Storage URLs with SAS tokens) and copied into a dedicated Blob Storage container via a deployment script resource.

Installation on the VM

Since we’re using a base Windows Server VM image, .NET 5+ is not guaranteed to be installed so we’ll use dotnet-install.ps1.

To ensure the Azure Functions host runs as a singleton and restarts when the VM instance reboots, we’ll add a Scheduled Task to launch the app.

The scheduled task will invoke a PowerShell script that sets up the proper environment variables and launches dotnet.exe, pointing at the Azure Functions host.

One of the great value propositions of Azure Functions Consumption plan is that auto-scaling based on load is handled for you. With this VMSS-based solution, we’ll need to do auto-scaling ourselves or settle on a fixed number of instances.

I opted to create a basic auto-scaling rule based on CPU counters:

I didn’t put too much thought into these rules but for my use case, they worked well enough. If I was running on AKS, I would probably try out something like KEDA.

If you use an HTTP trigger then your app very likely needs to be accessible to the internet (or at least a virtual network) so you have to think about routing incoming traffic to one of the VMSS nodes.

The approach I used here was adding an Azure Load Balancer resource which is a layer 4 load balancer. You can integrate a Load Balancer (LB) with VMSS such that connections are distributed across all VMSS nodes.

If you don’t have any HTTP triggers and just process queue messages or run on a timer, you don’t need a load balancer at all and no incoming traffic needs to be allowed to your nodes.

As the VMSS scales in (reduces instances) or your Spot VMs get evicted, it would be great to attempt a graceful shutdown on the Azure Functions host. I believe this can be achieved by querying the Azure Metadata Service for scheduled events. For any worker role that is processing a queue message, this can be ideal the dequeuer (your app) can learn of an upcoming shutdown event and gracefully release the handle (or lease) on some queue message. This can lead to better message processing since the maximum lease duration will not need to be exhausted by those queue messages that were not yet completed by the shutting-down worker.

Suppose you are using Azure Spots VMs and your region + SKU combination is no longer available, perhaps due to capacity constraints in that region. Well, it would be great to have another region + SKU combination spin up automatically so that your Functions app is still running. There’s some nuance to this problem because it suggests we likely need some dedicated compute to perform such orchestration. Also choosing different regions may impact latency between your workers and any storage or persistence layer you have (e.g. an Azure Storage account). Also, the price of VMs varies from region to region.