The fastest way to dynamically activate objects in .NET

… at least according to my brief investigation.

For one of my side projects, ExplorePackages, I wanted to know the fastest way to activate an arbitrary type in .NET. In other words, given a type parameter T or variable of type Type, what’s the fastest way to call the parameterless constructor for that type. This is a pretty common scenario for deserializer libraries. Imagine you are given encoded data in some byte stream and you know the format (JSON, CSV, etc) and you want the object model that represents those bytes. Well, you need to activate a class (or call new Foo()) at some point so that you can fill the live instance with data from the bytes.

In my experience, the most common approaches to this problem are to use the Activator.CreateInstance method or to use reflection to get the parameterless constructor of the Type. It turns out these are not always the best!

I figured it might be useful to try a bunch of different approaches with BenchmarkDotNet and post the results. Also, it’s been forever since I’ve blogged, and I needed to make sure I still knew how to publish to this dang thing.

I tried the following approaches for three types: object, StringBuilder, and a big POCO I had laying around. It turned out that the difference between the three types in terms of performance was not interesting so I just mentioned the POCO performance below since I thought it best matched the used case of “dynamic activation of a class during deserialization”.

I ran the benchmarks on my Surface Book 3 running Windows 10, with three different runtimes:

Note that the new T() approach only works in generic methods and not in Type methods.

The POCO I used is referred to as PackageAsset and has 25 properties – a mixture of reference and value types.

The fastest way to create an object in .NET is by calling new directly on that type 😂… but that’s not surprising. But really, if you can explicitly activate the type in a calling method and pass down the instance, this will be the fastest. Depending on your usecase, you may even be able to get away with a single instance of the classe – perhaps you’re directly serializing again and can reuse the instance.

The next fastest way is to use IL emit to generate a method that simply calls the constructor. However it should be noted that the upfront cost of using IL emit is staggering and should only be considered if the constructor is called roughly 4000 times or more per process (assuming you cache the IL emit at the process level, e.g. static).

Here is the activation time of my PackageAsset POCO. This chart excludes the uncached IL emit approach since it made the picture unreadable since the measurements for that approach so high in comparison. This averages the results of all three frameworks.

The value of the measurement (Y axis) is the ratio against the baseline. 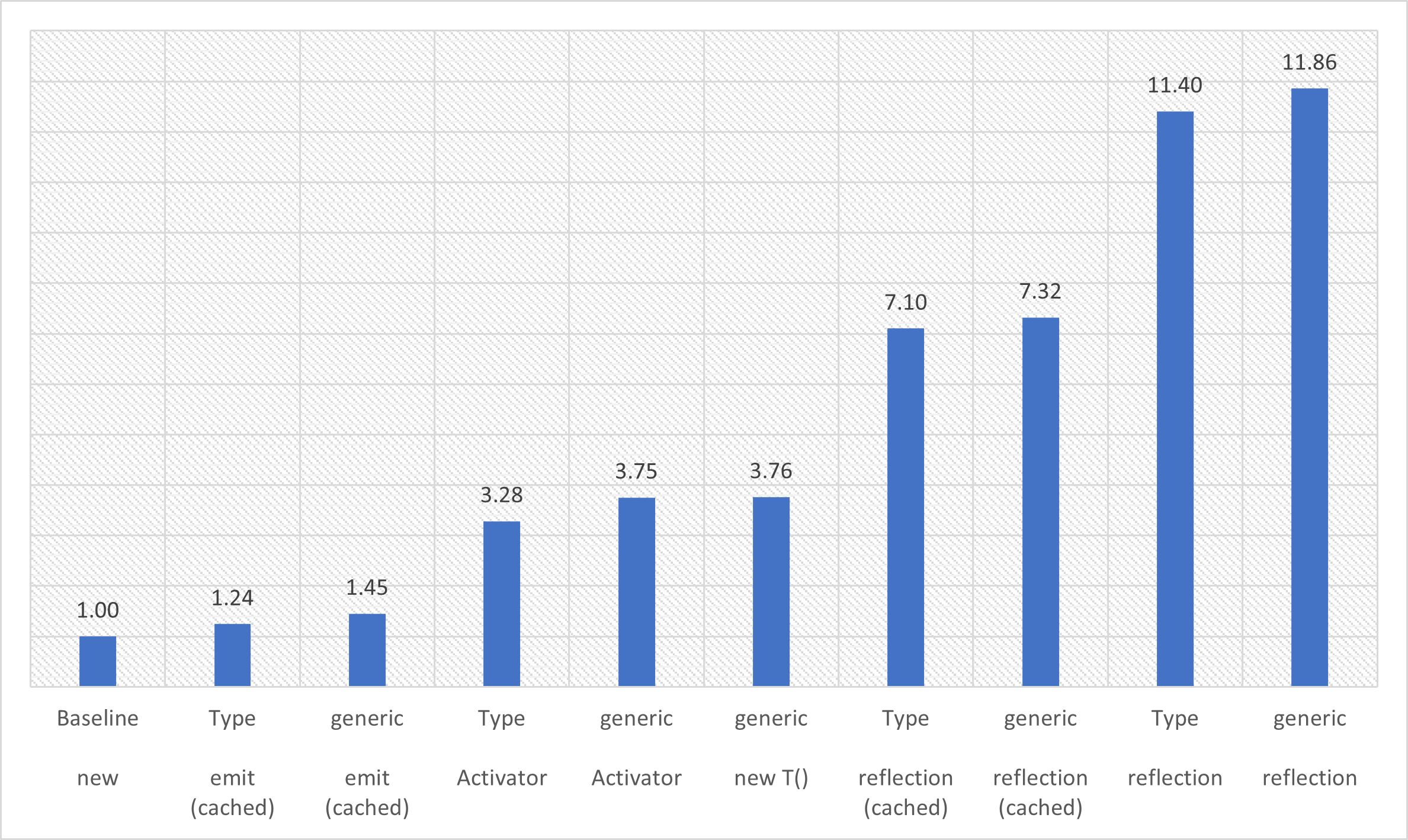 As you can see the next runner up are the Type method and generic variants of IL emit.

As an example, you could use code like this to IL emit a delegate which produces an object of an arbitrary type. For this approach to be performant, you must cache the delegate instead of regenerating it every time.

Here are the nanosecond durations for each approach, on each framework. This is for the activation of my POCO.

When you use IL emit for this purpose (or probably any other purpose) you should carefully consider the upfront cost of the emit amortized over the execution of that IL during your process lifetime.

Activator.CreateInstance seems to be best approach if you don’t plan on creating more than several thousand objects of any given type.

There is a small overhead (2 to 10 nanoseconds) for using generics over a Type method parameter. This makes sense since many of the approaches need to call typeof(T) on the generic type parameter T to get a Type in the method body anyway. This holds true over all frameworks tested.

Calling new directly on my POCO and on object is faster on .NET Framework but slower for StringBuilder. This is a surprising result. Results are here, in nanoseconds.

Perhaps this is “margin of error” stuff? Maybe I need to reproduce this on another machine? Maybe this is an investigation for another time…

The code for this is stored on GitHub: joelverhagen/ActivatePerf

The BenchmarkDotNet and Excel data (for the charts and tables above) are here: ActivatePerf-data.zip