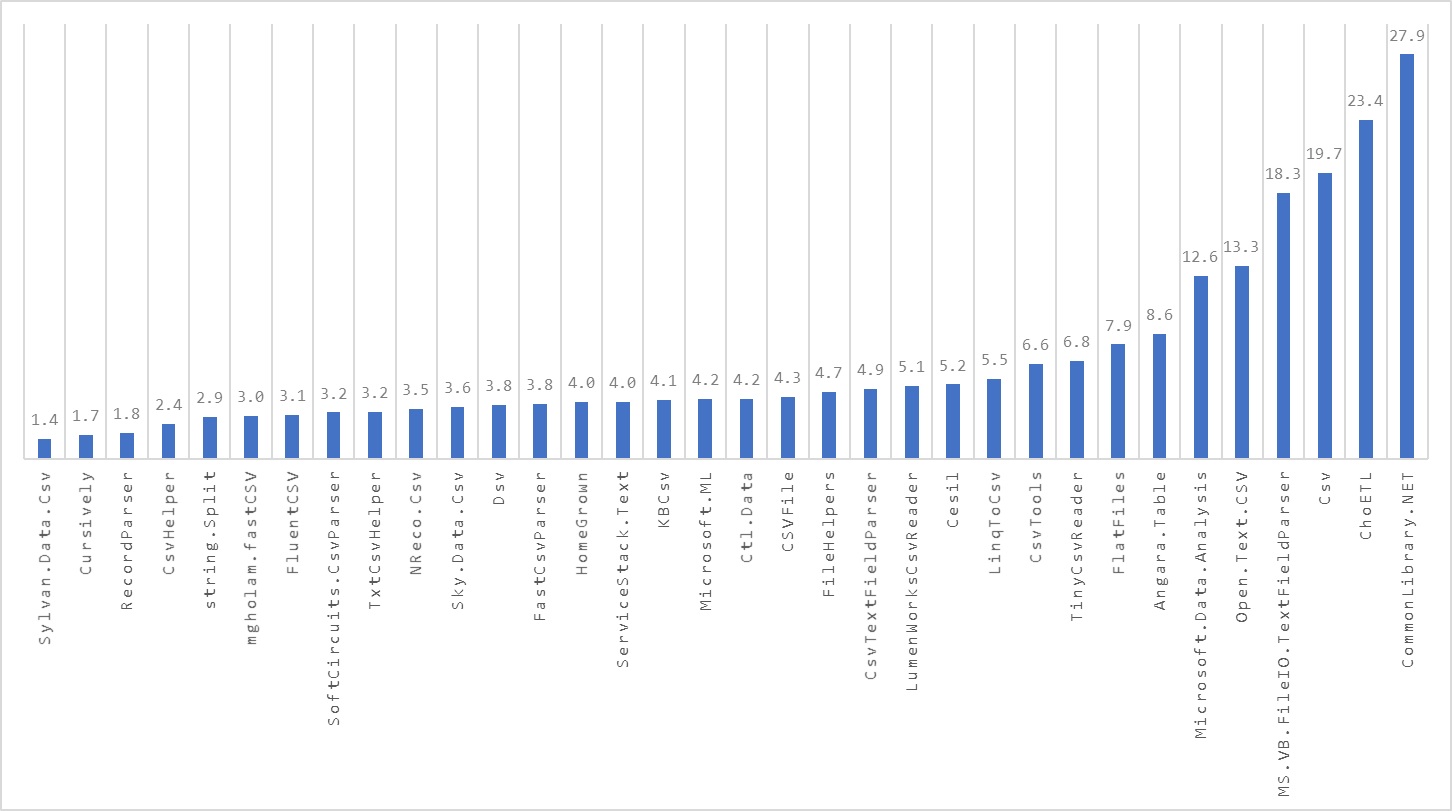 🏆 Congratulations Sylvan.Data.Csv! This library has taken the first place by parsing a 1 million line file in 1.39 seconds. Mark employed a new strategy to pull ahead of the pack by using SIMD. His first attempt worked great on newer Intel processors but my older AMD Zen 2 processor used for the benchmarks wasn’t working as well. He was kind enough to enhance his implementation to work well even on my older hardware (more context on his PR).

Since I originally posted, Josh Close (author of the most popular CsvHelper) has put a lot of work into performance and has brought his implementation from 10th place to a close 4th place. HUGE improvement. I haven’t tested “higher level” data mapping scenarios (which are likely the most common CsvHelper usages) but it’s really exciting to see such a big performance improvement in the most popular CSV parsing library.

I also want to mention some incredible work by Aurélien Boudoux who reworked his library FluentCSV to improve the performance. I have to say this is the most impressive performance improvement I’ve seen in this project. In the last round, his 2.0.0 version clocked in at 57 seconds for 1 million lines (last place). With version 3.0.0, he brought the time down to 3.2 seconds (fifth place)! Read more about his own performance analysis. Awesome work, Aurélien! Great to see such a nice API with excellent performance.

RecordParser, a newly tested library, took third place from CsvHelper. I hadn’t heard of this library before, but the performance is excellent and the adapter code is extensive and leverages several OSS libraries (Ben.StringIntern and System.IO.Pipelines) so it maybe be useful to look through to learn tricks for your own performance adventures.

Finally, I wanted to mention that two of the libraries provide better performance via data mapping to a full POCO or only provide parsing via data mapping in their API, as opposed to most libraries which provide raw, low-level access to a string array per row. This means that the tests for these APIs are perhaps not as representative of their intrinsic parsing performance. But I chose to still include them for completeness. These libraries are ChoETL (reference) and FileHelpers (reference). Thanks Mark Pflug for this investigation.

Also, a previous version of this post was using .NET Core 3.1. .NET 5 gave a measurable improvement on all implementations, averaging about a 10% reduction in runtime. Then, when we moved the benchmarks from .NET 5 to .NET 6 preview, we got another 4% reduction in runtime on average. Nice work .NET team!

This entire update was done by Mark via a PR. Thanks!

This entire update was done by Mark. Thanks so much ❤️! 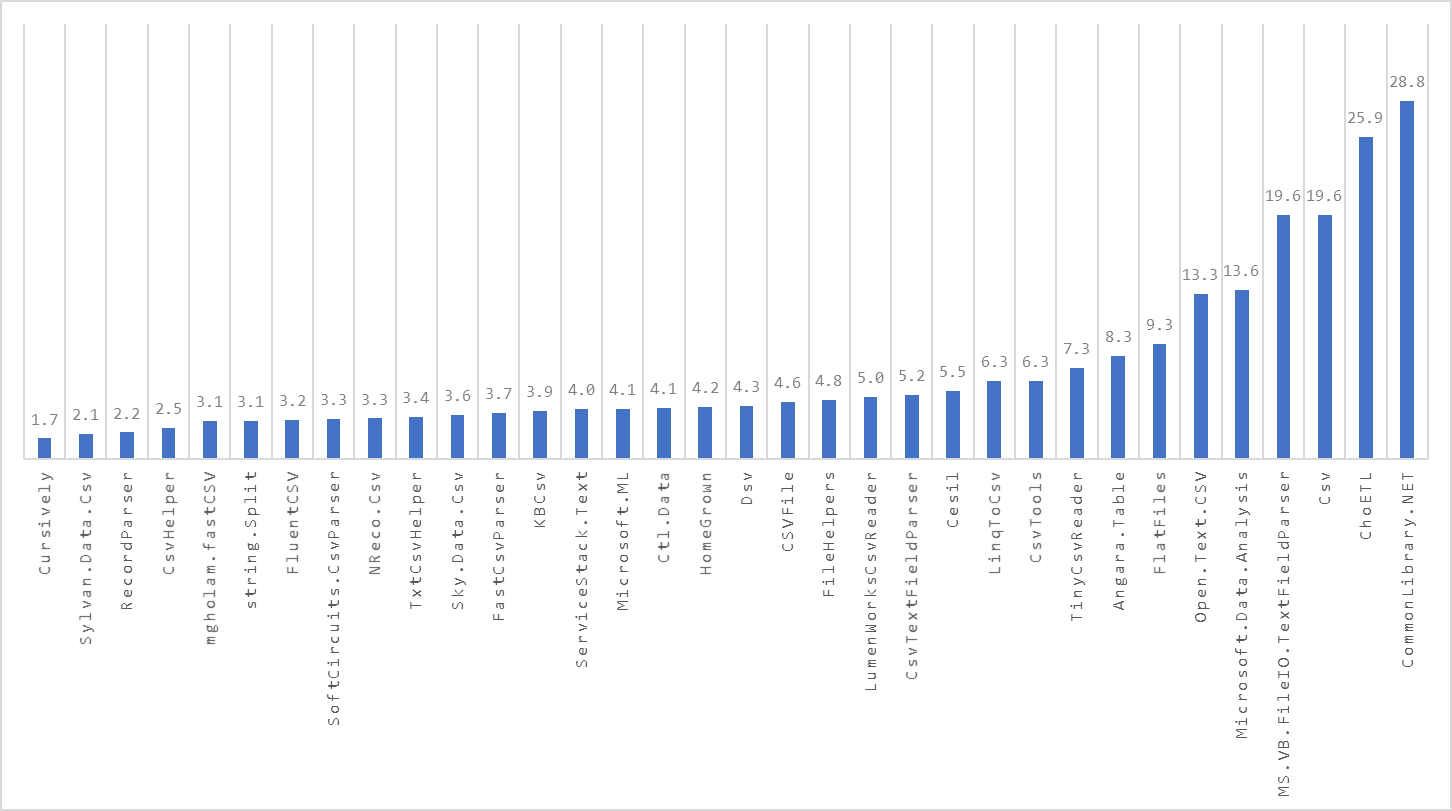 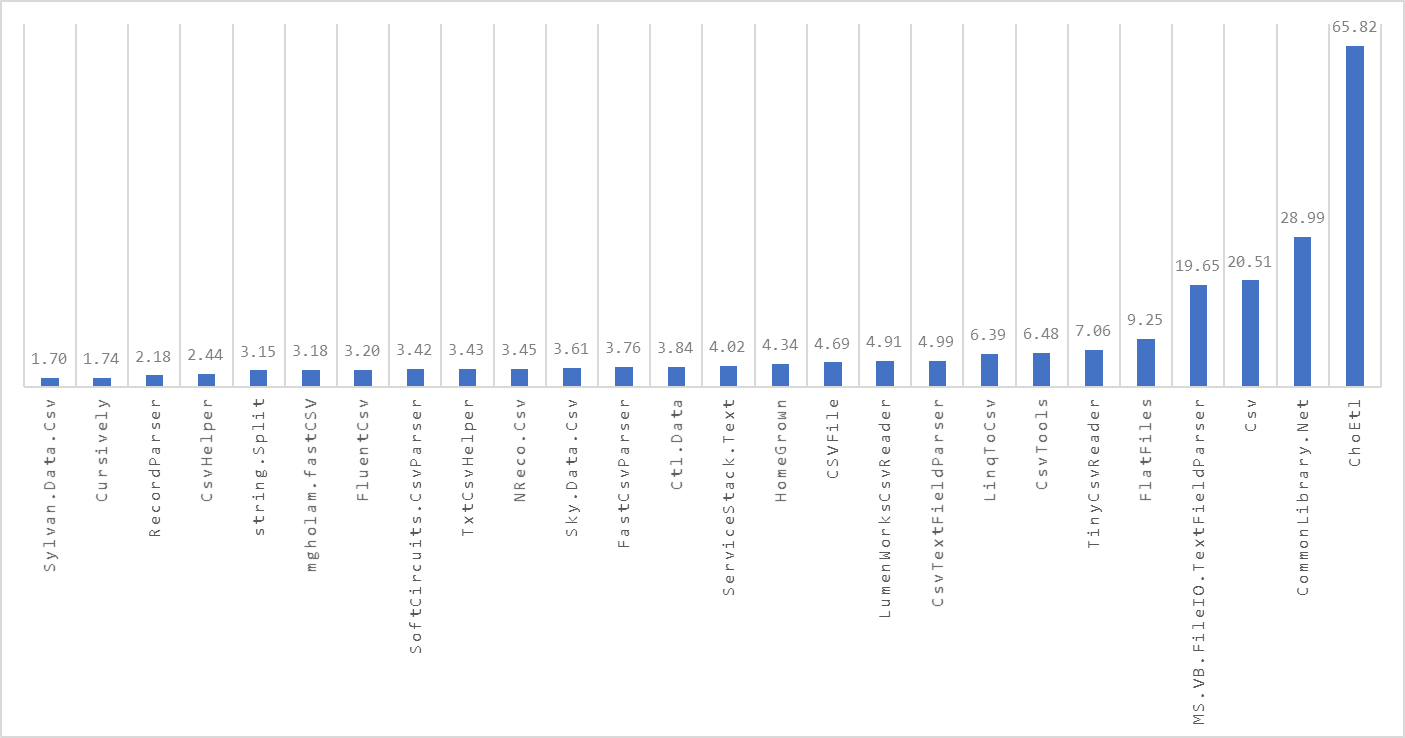 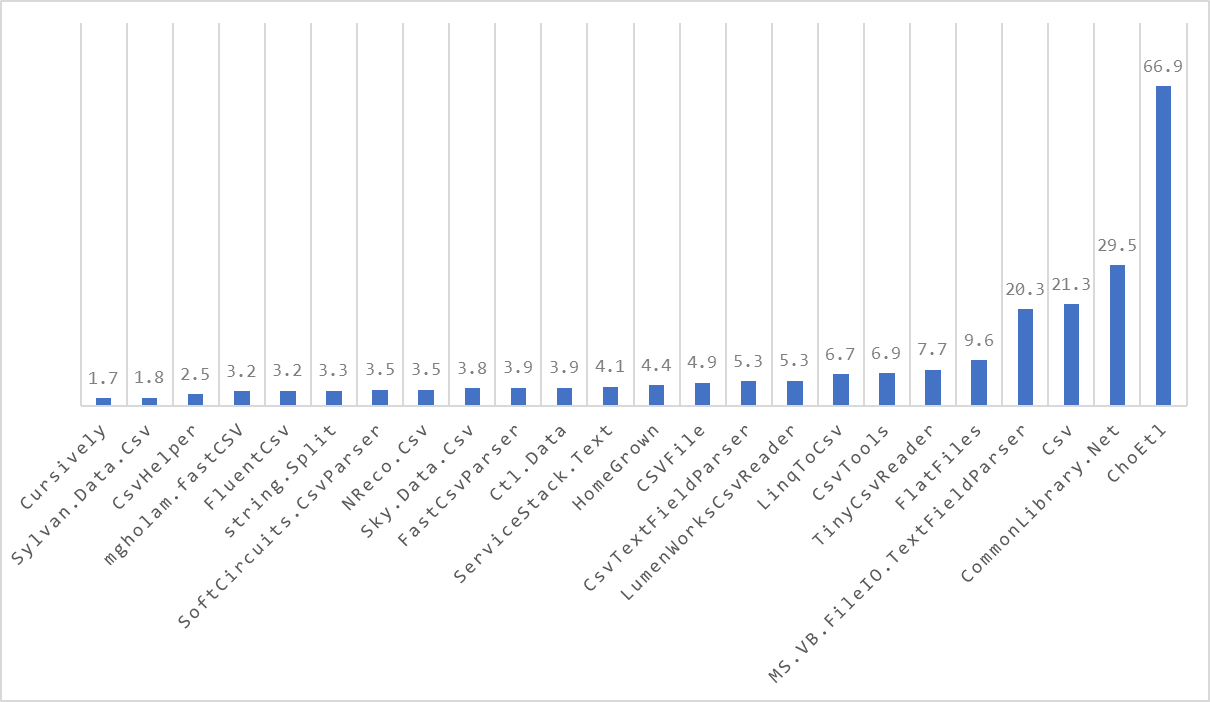 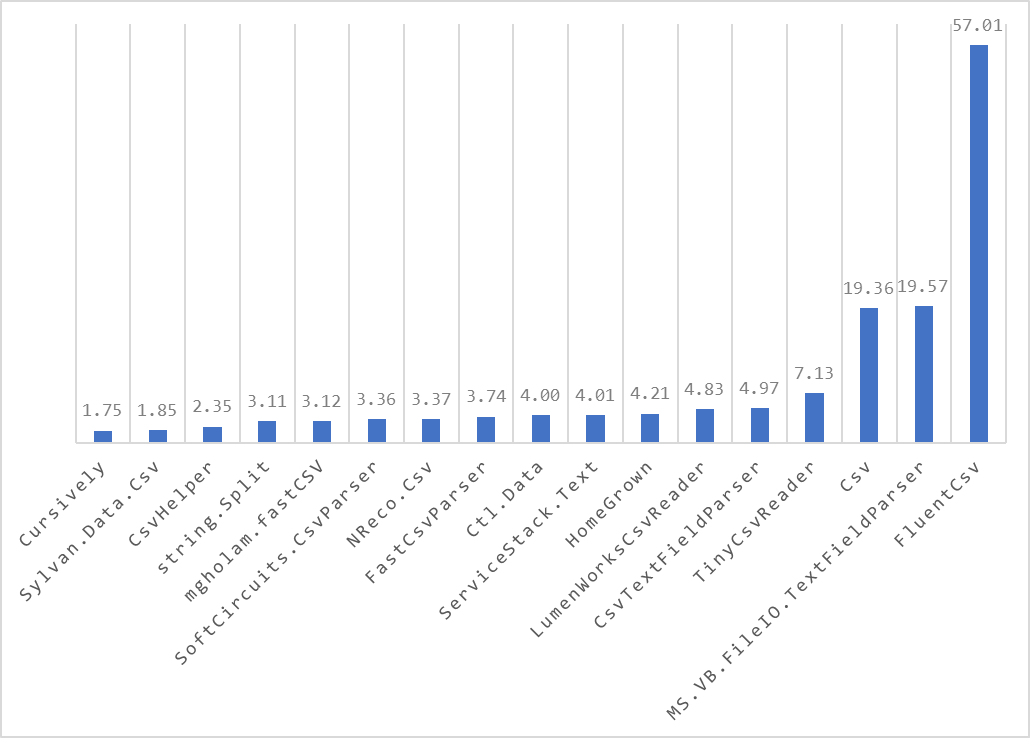 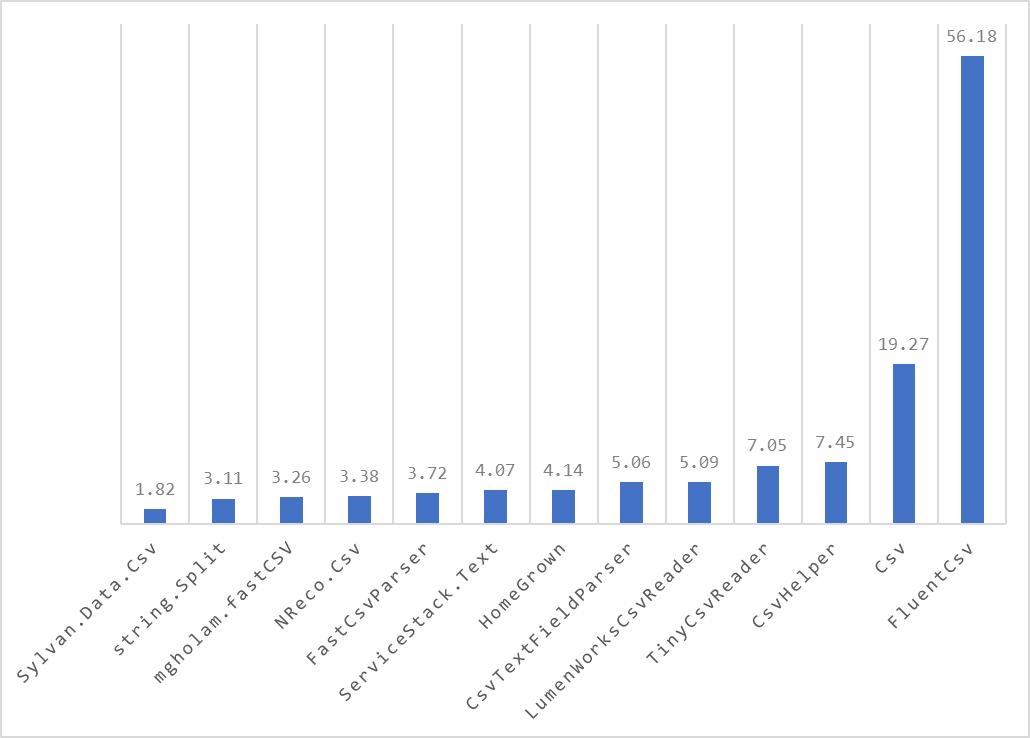 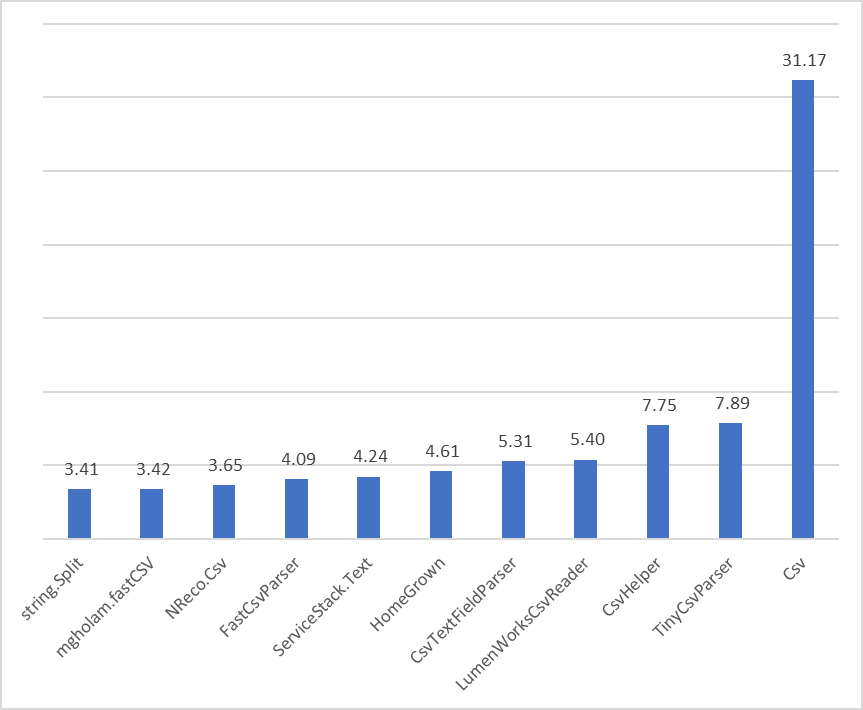