A Programmer's Experience with Pure Data

During this past quarter at school, I have been taking a class called “Jammin’ with Laptops”. Overall, it’s been a very interesting course. It hasn’t been interesting in the same way that my Computer Science courses have interested me. In my CS course, I’ve been stimulated academically. The theory, the math, the not programming (I’m looking at you Dr. Berman). In Jammin’ with Laptops, it’s been more of an artistic stimulation. Call me crazy, but I really didn’t know this kind of artistic stimulation until now… it’s kind of awesome (even though I pretty much suck at making music)!

There are three main units in the course: waveform editing with Audacity, live DJing and beat matching with Mixxx, and audio/visual programming (like computer programming) with Pure Data (yes, I got a little something-something for my programming fix this quarter!). One thing I really love about my professor in this course is that he is totally into the open-source movement. In other words, $0 on books/software for that class. Also a big win in my mind.

I had already messed around with Audacity a lot on my own time before the class. Unfortunately, Mixxx didn’t hold much allure for me. I think it’s because if I was to ever jam with my laptop, I would probably spend a billion hours making a cool electronic track in FL Studio and Audacity… and then put it up on SoundCloud or YouTube or something. I am the last person in the world you’ll ever see up there DJing. Maybe I just don’t get the whole live DJ thing. Aside: maybe I’ve totally missed my professor’s whole point of the class…

The real interesting part of the class for me was learning about Pure Data (PD for short). Wait! Programming is interesting to a programmer/Computer Science major? Shocker! I’m going to go over some of the things I liked, some things I disliked, and then show off the fruits of my labor. I spent about 4 hours from the time I downloaded PD and installed it to when I finished my little program. To be honest, there were a couple of lectures about the basic syntax and ideas behind PD, so I didn’t truly start with zero knowledge. Not sure if the 4 hours for the below code is an indication of my own numbscullery or not.

Quick overview of PD for those that are unaquainted: the basic interface with PD is a blank white canvas where you place objects. Each object has 0 or more inlets and 0 or more outlets. To make a program or “patch”, all you do is connect the outlets (plugs on the bottom of an object) of one object to the inlets (plugs on the top) of other objects. Very intuative.

The majority of the qualms I have up there are no doubt related to my own ignorance about Pure Data.

Fruits of my Labor

I made a thing. This was for an assignment for my Jammin’ with Laptops class, but that assignment simply required that I make a patch with five different objects. Easy peasy! I went a bit overboard. Here’s a picture of what the “code” looks like. Sadly, I think the code is more interesting to look at than the actually output. 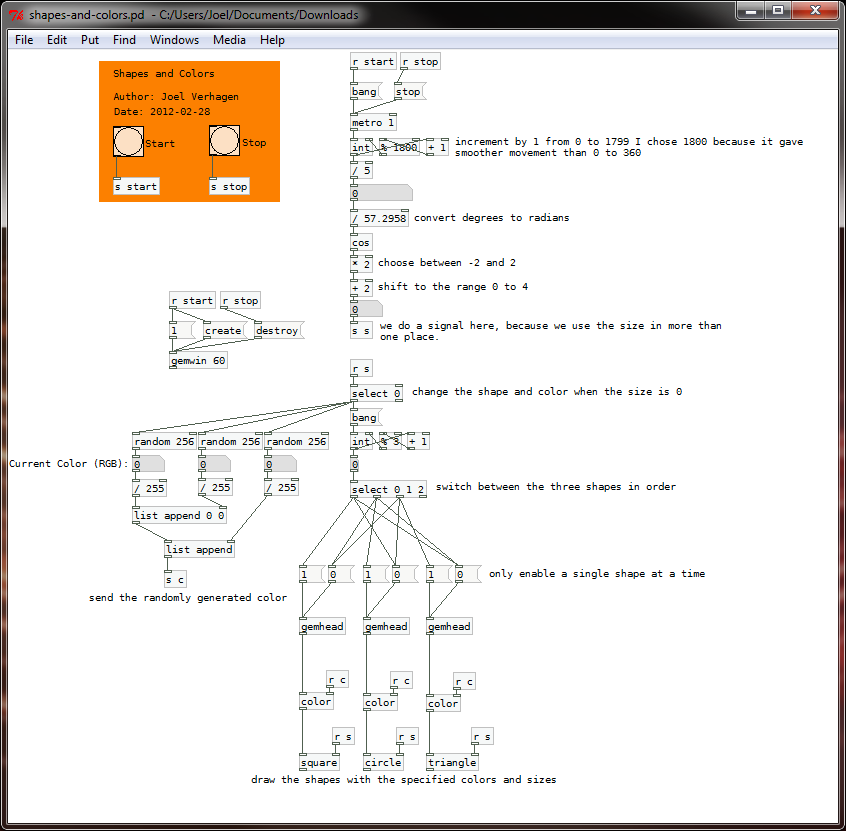 And this is the output. It takes a random color and draws a circle, triangle, or square in increasing then decreasing size on a black canvas. Pretty basic. Do you like my use of cos in there to make the resizing ease smoothly? 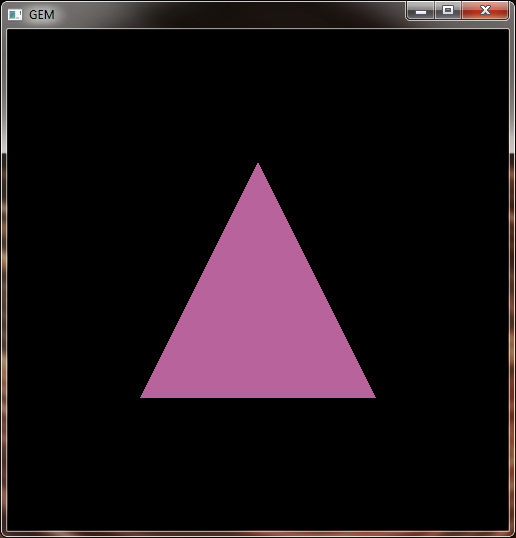 I have made the source file is available for your parusal. All you need is PD-extended to run it, which you can download off PD’s website.